Do you agree with these foreboding quotes? Do you expect the world to end soon because of disease, pathogens, or poor decisions? Would you like to explore an end of the world scenario?

Death by Design is a dystopian novel revealing how a single pathogen could destroy all the peoples on the Earth. You can buy and read Death by Design via Amazon: https://amzn.to/33GsnID.

The rapid death of unusually high numbers of human beings through disease can seriously dent the human population. Carried to an extreme, it is not too hard to imagine it wiping out the human species. — Isaac Asimov – http://thetrackerseries.com/isaac-asimov-on-disease-and-extinction

When the facts are incontrovertible and the conclusions inescapable; when success could bring a vast improvement in the welfare and happiness of millions; and when the penalty of failure is global disaster: surely humanity will want to collaborate and make sure that sanity prevails. … Maybe it is time that instead of controlling the environment for the benefit of the population, we should control the population to ensure the survival of the environment. — Sir David Attenborough, broadcaster and naturalist – http://thetrackerseries.com/david-attenborough-on-population-control

#ExtinctionRebellion Only the rich fuckers will survive. The rest of us are fucked. Wanna save the planet? Then you got to kill the problem, which is humans. We need another good war to reduce the population or a good old pandemic. — BitByteRecycle tweet – http://thetrackerseries.com/save-a-planet-kill-the-rich

This is the hardest thing we will have done—certainly in my lifetime—as a country. This is on par with winning World War II, perhaps even more challenging. — Pete Buttigieg, mayor (on fighting climate change) – http://thetrackerseries.com/pete-buttigieg-on-fighting-climate-change

We need to have a realization that we’ve got about 35 years worth of oil left in the whole world. We’re gonna run out of oil. — Jimmy Carter, U.S. president – http://thetrackerseries.com/jimmy-carter-on-running-out-of-oil

In searching for a common enemy against whom we can unite, we came up with the idea that pollution, the threat of global warming, water shortages, famine, and the like would fit the bill. … We believe humanity requires a common motivation, namely a common adversary in order to realize world government. Bring the divided nation together to face an outside enemy, either a real one, or else one invented for the purpose. — Club of Rome – http://thetrackerseries.com/club-of-rome-a-common-enemy

The Real Enemy Is Humanity Itself. — Club of Rome, 1997 – http://thetrackerseries.com/club-of-rome-the-real-enemy-is-humanity-itself

Unfortunately the nature of the bioterrorism threat makes determining the risk difficult. The presence of an intelligent adversary who can adapt to successful countermeasures complicates standard assessment techniques. — Congressional Research Service, 2011 – http://thetrackerseries.com/the-nature-of-the-bioterrorism-threat

Once you abandon strict adherence to what science tells us, once you start arranging the truth in a press conference, then anything is possible. — Michael Crichton, novelist

Here is the Crichton Conundrum: If people are against something, then any theory is correct that supports their beliefs, even when the science is total bunkum. – http://thetrackerseries.com/michael-crichtons-rule

71% of all carbon emissions are caused by 100 corporations. If we all just kill 1 oil exec each, the problem will be solved. Execute the rich, end capitalism, save the planet. — Daring Hard Ox tweet – http://thetrackerseries.com/save-a-planet-kill-the-rich

Great things can be done with the power of technology; and there are things you would not want done. Most of the public does not appreciate what is coming. — Jennifer Doudna, biochemist, University of California at Berkeley – http://thetrackerseries.com/jennifer-doudna-on-the-power-of-technology

A massive campaign must be launched to de-develop the United States. De-development means bringing our economic system into line with the realities of ecology and the world resource situation. — Paul Ehrlich, biologist and author of The Population Bomb – http://thetrackerseries.com/paul-ehrlich-on-the-de-development-of-the-united-states

In the 1970s and 1980s, hundreds of millions of people will starve to death in spite of any crash programs embarked upon now. — Paul Ehrlich, author of The Population Bomb (1968) – http://thetrackerseries.com/paul-ehrlich-hundreds-of-millions-of-people-will-starve

Giving society cheap, abundant energy would be the equivalent of giving an idiot child a machine gun. — Paul Ehrlich, biologist and author of The Population Bomb – http://thetrackerseries.com/paul-ehrlich-on-cheap-abundant-energy

The world as we know it will likely be ruined before the year 2000. … World food production cannot keep pace with the galloping growth of population. — Environmental Fund open letter (1975) – http://thetrackerseries.com/environmental-fund-the-world-will-be-ruined-by-2000

It’s only going to get worse as climate gets worse and more and more people are harmed. We have 11 years to avoid catastrophe, and we can’t do it unless people mobilize by the millions in the streets. — Jane Fonda, actress – http://thetrackerseries.com/jane-fonda-on-the-climate-change-catastrophe

We must make this an insecure and inhospitable place for capitalists and their projects. We must reclaim the roads and plowed land, halt dam construction, tear down existing dams, free shackled rivers and return to wilderness millions of acres of presently settled land. — David Foreman, co-founder of Earth First! – http://thetrackerseries.com/david-foreman-return-to-wilderness

Mankind is the most dangerous, destructive, selfish and unethical animal on the earth. — Michael Fox, vice-president of The Humane Society – http://thetrackerseries.com/michael-fox-mankind-as-a-dangerous-animal

You can sway a thousand men by appealing to their prejudices quicker than by convincing one man by logic. — Robert Heinlein, science fiction author – http://thetrackerseries.com/robert-heinlein-on-prejudices-vs-logic

Warming fears are the worst scientific scandal in history. When people come to know what the truth is, they will feel deceived by science and scientists. — Dr. Kiminori Itoh, physical chemist – http://thetrackerseries.com/kiminori-itoh-on-global-warming-fears

A pathogen that begins in a remote town can reach major cities on all six continents in 36 hours. — Olga B. Jonas – http://thetrackerseries.com/olga-jonas-on-pathogens-spreading

When inconceivably cold-blooded evil is in command, the victims are truly helpless. — Charles Krauthammer, commentator – http://thetrackerseries.com/charles-krauthammer-on-cold-blooded-evil

We wish you realized the carbon impact of the cloud services that power the Internet and forswore all the things you apparently believe are powered by unicorn exhalations. — James Lileks, commentator – http://thetrackerseries.com/james-lileks-the-power-of-unicorn-exhalations

Humans on the Earth behave in some ways like a pathogenic micro-organism, or like the cells of a tumor. — James Lovelock, author, Healing Gaia: Practical Medicine for the Planet! – http://thetrackerseries.com/james-lovelock-on-humans-as-tumors

By the end of this century, climate change will reduce the human population to a few breeding pairs surviving near the Arctic. — James Lovelock, author, Healing Gaia: Practical Medicine for the Planet! – http://thetrackerseries.com/james-lovelock-human-population-affected-by-climate-change

Poor people should kill all of the rich people in order to save humanity and the planet. — The Muslimz tweet – http://thetrackerseries.com/save-a-planet-kill-the-rich

While there have always been famines and warnings of famine, food experts generally agree that the situation now is substantially different. The problem is becoming so acute that every nation, institution, and every human being will ultimately be affected. — New York Times, 1969, on writing about food shortages due to population growth – http://thetrackerseries.com/new-york-times-on-the-coming-famines

An international team of specialists has concluded from eight indexes of climate that there is no end in sight to the cooling trend of the last 30 years, at least in the Northern Hemisphere. — New York Times, 1978 (just 10 years before global warming became the received wisdom from the same mainstream media) – http://thetrackerseries.com/new-york-times-on-the-coming-ice-age

The extinction of Homo Sapiens would mean survival for millions, if not billions, of Earth-dwelling species. Phasing out the human race will solve every problem on Earth—social and environmental. — Ingrid Newkirk, President of PETA – http://thetrackerseries.com/ingrid-newkirk-on-the-extinction-of-homo-sapiens

If we are unprepared for the next advance, the result could be hunger and death on a scale unprecedented in all of history. … During the lifetime of our grandchildren, arctic cold and perpetual snow could turn most of the inhabitable portions of our planet into a polar desert. – Leonard Nimoy, host, In Search of the Coming Ice Age (1978) – http://thetrackerseries.com/leonard-nimoy-in-search-of-the-coming-ice-age – Ten years before global warming became an invented political meme, we were told to watch out for the coming Ice Age.

I don’t claim to have any special interest in natural history, but as a boy I was made aware of the annual fluctuations in the number of game animals and the need to adjust the cull to the size of the surplus population. — Prince Philip of England – http://thetrackerseries.com/prince-philip-on-surplus-populations

If I were reincarnated, I would wish to be returned to Earth as a killer virus to lower human population levels. — Prince Philip of England – http://thetrackerseries.com/prince-philip-of-england-on-killer-viruses

Isn’t the only hope for the planet that the industrialized civilizations collapse? Isn’t it our responsibility to bring that about? — Maurice Strong, founder, UN Environment Programme – http://thetrackerseries.com/maurice-strong-the-only-hope-for-the-planet

We need to keep the fossil fuels in the ground and we need to focus on equity. And if solutions within this system are so impossible to find, then maybe we should change the system itself. We have not come here to beg world leaders to care. You have ignored us in the past and you will ignore us again. We have run out of excuses and we are running out of time. We have come here to let you know that change is coming, whether you like it or not. — Greta Thunberg, teenager – http://thetrackerseries.com/greta-thunberg-change-the-system-itself

In the conflict between good and evil, the light and the dark, the light doesn’t always win. — unknown – http://thetrackerseries.com/the-conflict-between-good-and-evil

We need to seriously rethink our socioeconomic framework. It will be a huge social and political challenge, but we have to move to an economy based on no growth or limited growth. And we need to bring together economists, scientists, and politicians to devise a strategy for doing what has to be done. — Geoffrey West, physicist – http://thetrackerseries.com/geoffrey-west-on-a-no-growth-economy 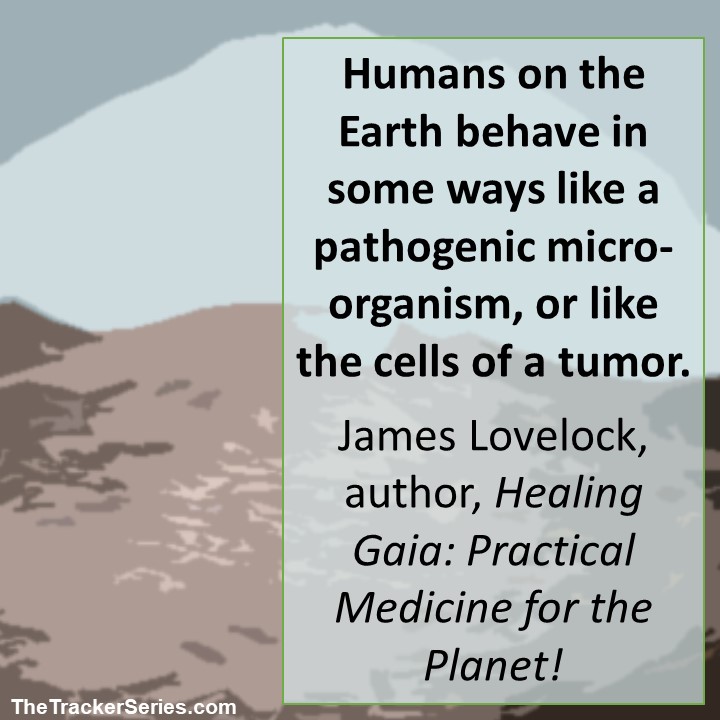 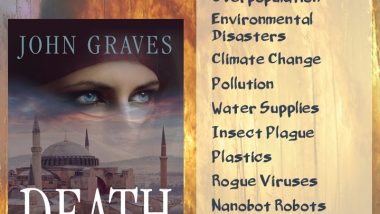 What Is Your Greatest Fear? 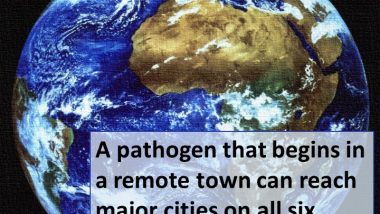